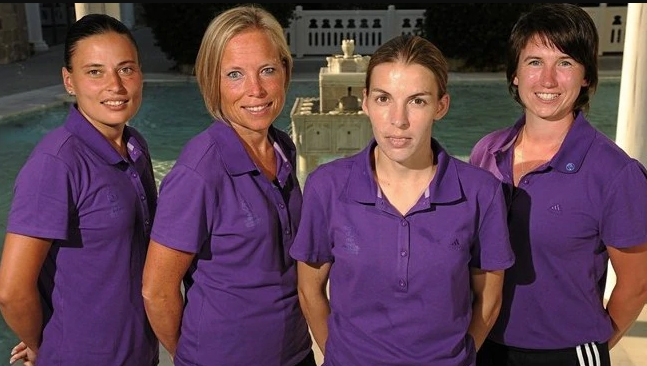 Michelle O’ Neill, a member of the Wexford Branch of the Irish Soccer Referees Society, who by day works as a Swimming Teacher and Lifeguard began her career as a Referee with the  Wexford Schoolboys League in 2008 and a mere 7 years later has been selected to travel to the FIFA Women’s World Cup Finals in Canada later this Summer where she gets to work at the highest echelons of World Football alongside the current greats of Women Referees, the likes of Bibiana Steinhaus from Germany.

Having joined local Junior Football in Wexford in 2009, Michelle was accepted onto the 2009/10 School of Excellence and was Promoted to the National League June 2010. Within 18 months she was presented with her FIFA Badge in acknowledgement of her progress and dedication, following some outstanding and consistent performances at National Leagues games across the Country.

Currently Officiating in SSE Airtricity League, EA Sports Cup and Continental Tyres Womens National League, World Cup Qualifiers, Womens Championship League, Euro Qualifiers and U19 UEFA Championship Matches Michelle has earned her place amongst the elite of World Officials but how did this all happen for the Lifeguard from Wexford. Her 1st ever Assistant Referees appointment was The U10 Cup Final in Wexford Schoolboys and District League Cup.  It was my first introduction to the flag and Assistant Refereeing. When I was attending School of Excellence I got the opportunity to go to the Gaynor Cup and Umbro Cup, which are brilliant tournaments for up and coming referees. Then to her 1st International tournament which was the U19 UEFA 1st round in Estonia.  Just before I went I had my 1st International friendly between Ireland and Italy U17’s in 2009. As we all know it is not easy to break into the LOI Elite Panel and to remain on the top is no small feat, Michelle’s Ist Airtricity League game was in Turner’s Cross, Cork, Cork vs Limerick, June 2010, this after her 1st Senior Line between Wexford Youths vs Wolverhampton Wanderers composedly in front of over 3000 people, Kevin Doyle’s homecoming  in 2009. Big games and crowds have become part and parcel of the Wexford girls sporting life, The Mens Senior Ford Cup Final Sligo Rovers V Drogheda United and nearly 27,000 people in The Aviva Stadium was an exciting and amazing feeling to have been a part of the team of officials. It was a very proud moment for my family.

Michelle believes that a lot of people at different stages are involved in a referee’s career and all are very important. For her the Wexford Football League, Wexford Referees Society Committee, Wexford Schoolboys League, the League of Ireland Fitness Coaches, the School of Excellence Program Mentors & Tutors, Elite Referees, National League Panel Mentors, Observers, Panel Members, League of Ireland Legends, Observers and Mentors.  All referee colleagues, friends, family, and work. A network of people associated with every step taken as a referee have in no small way assisted Michelle fulfill her dream of getting to Canada. I have a passion for assistant refereeing but I didn’t expect to get as far as I have in my career. I have put a lot of hard work, time and dedication and preparation into my refereeing and discovered that “Nothing is impossible”.

To any Females who would like to start refereeing, there is a lot of  development and support networks out there for whatever level you strive to achieve or to become the best you can be at whatever level that may be as long as the main thing is enjoyment and the love of the game.

It is a great honour to be a representative for Irish referees in this year’s Women’s World Cup Finals in Canada in June 2015.  To be a part of this year’s refereeing team of officials is fantastic.

Having listened to Michelle’s version of her pathway she was very humble and thanked many people within the Referee Family, yet while she did tell me that she did put in some hard work, I believe that she has under estimated the perseverance and remarkable effort she has put into her Refereeing over recent years. Her work ethic is evident to all who have seen Michelle in action at matches around Ireland and Europe and her reward which is of incredible significance is as a result of this dedication.

I hope that Michelle’s amazing trip will be an incentive to others, both Male and Female to consider the opportunities that are available to those who become Referees.  Becoming a top-class Referee is a tough process, but highly rewarding if you do manage to hit the heights; travelling across the world, regularly interacting with greats in the game and Michelle has arrived at those heights. It doesn’t get any bigger than The World Cup Finals.

May I congratulate and wish Michelle the very best of luck with her appointment and say what an honour she has brought to every Member of the Irish Soccer Referees Society.

Bibiana Steinhaus, who will work with Michelle in Canada being confronted by Pep Guardiola as he and Steinhaus exchange words during Bayern’s recent 0-0 draw against Borussia Moenchgladbach.